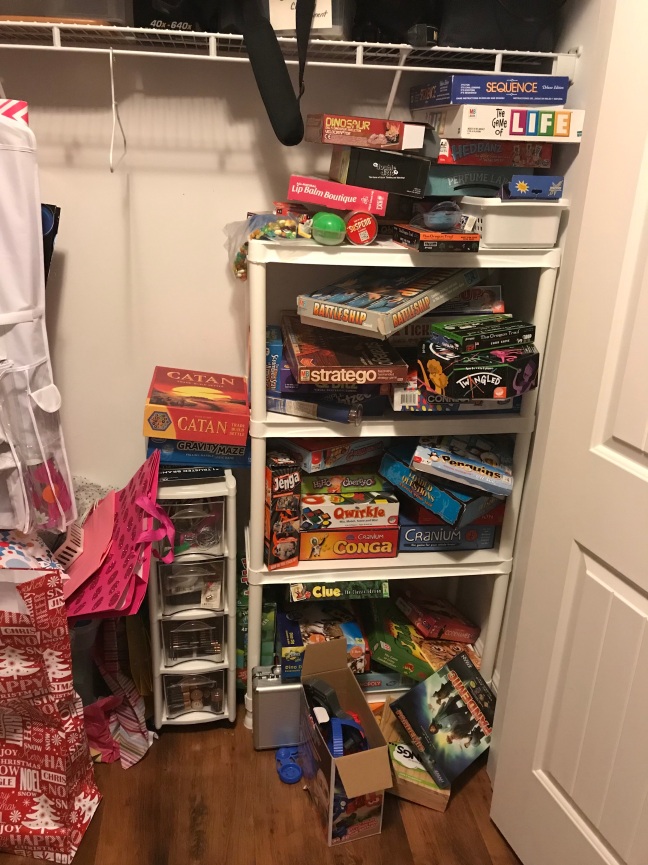 And . . . it drives me crazy. This is the space where we keep all of the board games our family likes to play. (Along with gift wrap and batteries because those are all logical things to keep in the same closet, right?) The problem with my front closet? It is always in a state of chaos, and this state of chaos causes my blood pressure to rise every time I open the door.

Over Christmas, our kids received four new games that were added to this closet. When I took this picture, game number one was hanging precariously, ready to tumble to the floor at any moment having been shoved in front of another game that was already on the shelf. Game number two fell off of the shelf it was placed on and now was on the floor. Game number three was on our kitchen table because I didn’t know quite where to shove it. And lastly, game number four (which hadn’t even been removed from its wrapper) was MIA. It might have been in the closet, but I honestly cannot confirm that.

This closet. This closet can best be described as chaotic, and if I’m honest with you, this is sometimes how my life looks as well. When decisions come my way, I say yes. I say yes and add to an already overloaded schedule. I say yes before I consider the trade.

Whichever path we take, we need to remember that we always have a choice.

Secondly, we need to remember that with each choice we make, comes a consequence. These consequences can be good or bad, but each one has an effect on us in some way or another. Lysa Terkeurst says, “Choices and consequences come in package deals. When we make a choice, we ignite the consequences that can come along with it.” In Scripture, we see numerous examples of people who faced consequences based on the choices they made. In the book of Genesis, we find the story of Adam and Eve. Eve was faced with the decision to obey God or listen to Satan and eat the forbidden fruit. Her choice? She disobeyed God. Her consequence? She and Adam were cast out of the Garden and sin entered the world. In the book of Exodus, we find the story of Moses. A Hebrew baby raised in the home of the Egyptian Pharaoh whom God calls to lead the Israelites out of captivity. Despite his fear over this task, he chose to obey God. His consequence? He watched as God work wonders and released his people. In 2 Samuel, we find the story of King David. David chose to follow his lustful desires and slept with another man’s wife. When it was discovered that she was pregnant, David had her husband killed. His consequence? That child that was conceived would die. When facing a decision, it is important to consider the possible consequences before you say yes.

Lastly, it is important to remember that with each decision we face, comes an opportunity for release. To release is to let go of something or to set something free. As women, we take on more than we can realistically handle. We say yes and add more and more to our already wearying schedules. We trade our time, our finances, our emotional health, and our peace in the names of our families, our homes, or the expectations of others. And then, we wonder why each additional yes leaves us feeling stressed and weary. Friend, with each decision we face, there is always an opportunity for release. Always. We need to become women that are in the habit of releasing things we have previously said yes to, to make room for our best yes assignments. We need to let go of those things that are no longer ours to do or those things that were never ours to begin with. Why don’t we do this?

How many of you are like me and have a closet full of clothes that you literally cannot wear right now? I look at my closet and see plenty of clothes that fit me right now, but, I also have clothes that are too big for me. I’ve worn them in the past and might need them again if I continue to eat  Christmas cookies at the rate I have been these past few weeks.   I also have clothes that I have not worn since I first got pregnant with my first child. Since before I first got pregnant with my first child! Why do I have them? We both know that after you have a baby, things never go back to how they once were! Yet, I hang onto this hope that maybe, just maybe someday, I’ll be back to a size 10. Can you relate? Please tell me that I am not alone in this.

I think back to my front closet as well. Many of the games in there are ones that we haven’t played in years. Yet, I’m afraid to let them go because maybe, just maybe we will want to play it sometime. We are afraid. We are afraid of missing out. We are afraid that we may release something that might be important sometime down the road.

Sometimes, however, it’s more than just the fear of missing out that keeps us from release. Sometimes we are stubborn and just plain out refuse to release something. We refuse to release it even though we know that harsh consequences are likely to follow. We refuse to release and as a result, we may miss out on some of the best things God has for us. We can see this in the examples I gave you earlier. Eve. She refused to release her desire for the forbidden fruit. Because of this, she and Adam missed out on Paradise. Moses. I shared how he obeyed God, but we also find in the book of Numbers that he disobeyed God as well. The Israelites were wandering in the desert and ran out of water. Now, this had happened before. The last time, God instructed Moses to strike a rock with his staff and water poured from it. This time however, God instructed Moses to just speak to a rock and water would come forth. Moses doubted God and struck the rock instead of speaking to it. Moses refused to release his fear and as a result, he missed out on entering the land God had promised his people. David. He refused to release his desire for Bathsheba. Because of this another man lost his life and David lost his son. He would miss out on watching his child grow up to be a man. Just like Eve, Moses, and David, we also will flat-out refuse to release things from our lives even though we know that there will likely be harsh consequences for us to follow. Have you ever done that?

Lastly, sometimes it isn’t the fear that we’ll be missing out or the flat-out refusal to let something go that keeps us from release. It’s our inability to make a decision. Sometimes I can’t let things go because I’m unsure of what decision will be best. I put off the decision in hopes that my circumstances will improve or the direction I should take will become clearer. I tell others that I’ll pray on it for a bit. Have you been there? Have you ever known deep within you the decision that must be made, but simply put it off? You put it off because you are uncertain which direction to take or are afraid of the consequences that will come with that decision. Lysa Terkeurst says, “Not making a decision is actually a decision. It’s the decision to stay the same.” She’s right. She’s absolutely right. My decision to put off a decision is me choosing to stay right where I am. And often, right where I am is filled with uncertainty and chaos.

To close, I want to share with you a book that I stumbled upon a few years ago. It’s called The Little Yellow Leaf by Carin Berger. It tells the story of a small yellow oak leaf. Though fall is nearing to an end, the leaf refuses to join the other leaves as they fall from the tree. He keeps telling us, “I’m not ready yet.” Because he refuses to release himself, he misses out on dancing in the air with the other leaves. He misses out on experiencing the fun that is found in being piled up with other leaves and having children jump on you. He finds himself feeling very alone. Alone because he chose not to release. How often are we just like that little leaf?

Friend, we have to let go. We have to release so that we can move forward in the plans God has for us. Lysa Terkeurst shares a story in her book, The Best Yes about a time that she visited a friend in Connecticut. Upon her arrival, she discovered that they had just received twenty inches of snow . . .  in the middle of the fall. As they left the airport, they passed pile after pile of not just snow, but broken trees as well. You see, the leaves had not yet had an opportunity to release themselves from their branches. The snow clung to the leaf filled branches, and they broke under its weight. Lysa says, “The trees weren’t designed to face snow before releasing their leaves. They weren’t made to carry more than they should. And neither are we.”

She goes on to tell us that this process of release . . . it’s a gift. Just like those trees in that fall snowstorm, we cannot carry the weight of two seasons at the same time. We were not created to carry so much. Lysa says, “In the violent struggle of trying, (we’ll) miss every bit of joy each season promises to bring.” This process of release is a gift my friend. A gift from our Father. When we have the courage to release those things in our lives that are no longer ours to do, it opens us up to being in a place ready to receive what God has for us next . . . what God has for us in this current season. Isn’t that our desire? To be right where God wants us right now?

Going back to my front closet. This is what it looks like now. 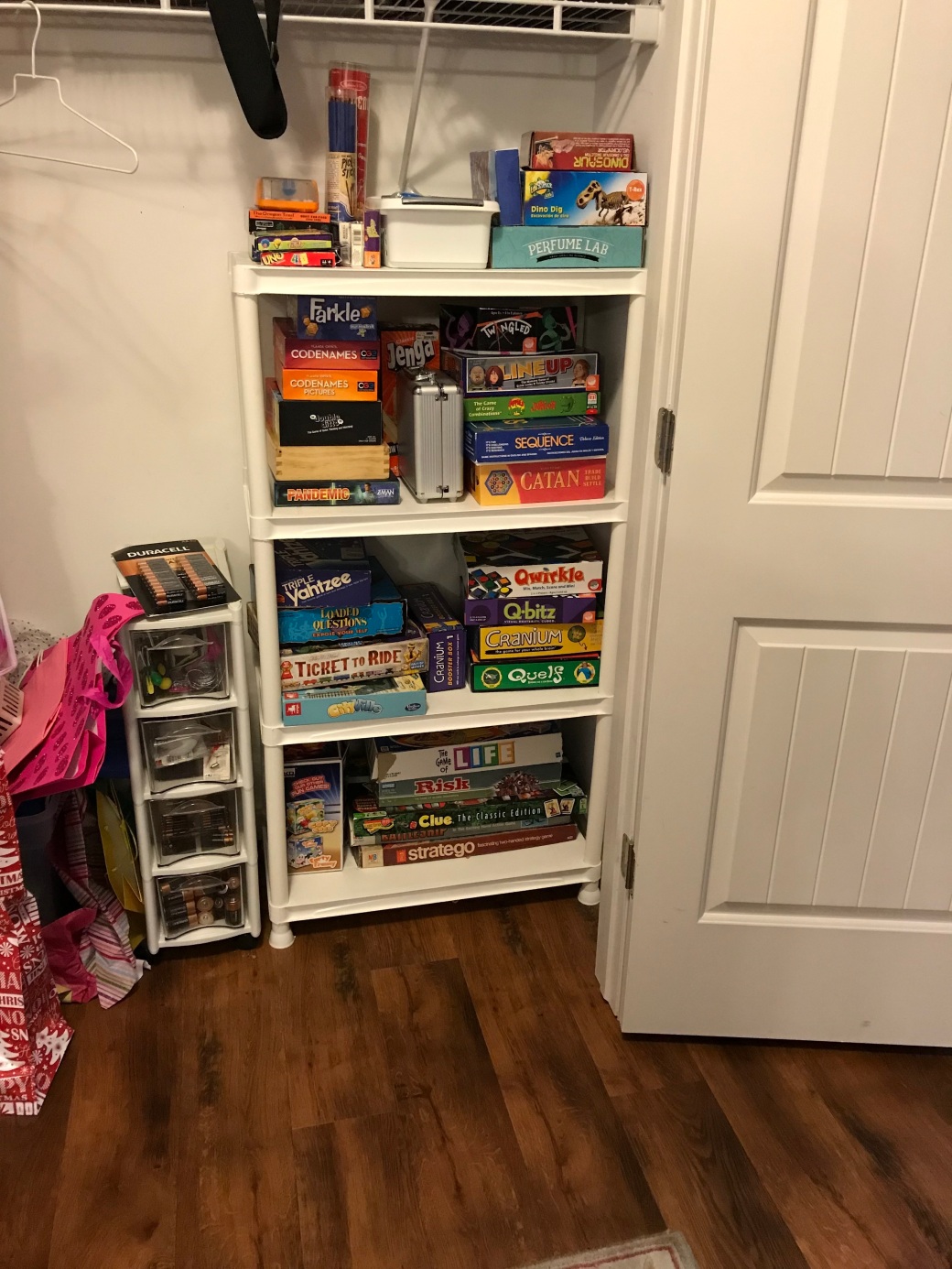 I made the decision to release some of the things that I had been holding on to. I released some of the old to make way for the new.

Is there something in your life, something in your closet that you’ve been holding onto so tightly? Have the courage to release it, friend. Release it to our Father. You can trust Him with it. Isaiah 26:3-4 (VOICE) tells us,

“You will keep the peace, a perfect peace, for all who trust in You, for those who dedicate their hearts and minds to You. So trust in the Eternal One forever, for He is like a great Rock—strong, stable, trustworthy, and lasting.”

“Why Was Moses Not Allowed to Enter the Promised Land?” Got Questions. https://www.gotquestions.org/Moses-promised-land.html. Accessed 31 Dec. 2018.

One thought on “The Gift of Release”